We constantly work to improve the quality of our beans which today surpass the average of 80 points becoming a refined coffee drink.

This protocol allows Robusta coffee beans produced at Giori farm to be used as a fine beverage 100% Robusta or even in the preparation of blends. In any case with the potential for achieving different sensory characteristics, depending on the color of the roast, aroma, acidity level, among others, which are chosen when preparing the beans.

Robusta beans produced at Giori farm in addition to having a lower acidity level than the Arabica ones which is a general characteristic of Conilon coffee bean has a more accentuated sweet note than the common for the species so as to lend to our beans a singular vocation to be turned into an exclusive drink in the cup. 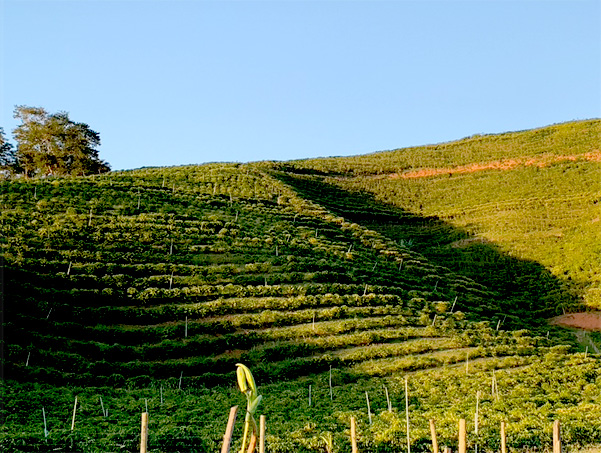 Our harvesting process is done selectively where only the mature beans (cherry coffee) are harvested to ensure homogeneity and obtain the best potential of the beans in aroma and flavor. After harvesting, the coffee is immediately taken to drying in order to prevent the fruits from fermentation.

We carry out different types of drying and each with the purpose of lending different sensory characteristics to coffee in order to allow the beans selected for each method to be developed and express the best of their potential in the cup.

This alchemical process, carried out from the cultivation to the processing of coffee, wakes up in the molecules of the beans the memories of care and affection produced by the plant during pre-harvest that is even before the appearance of the flowers and fruits of the coffee plantation. It is this alchemy that later on during the coffee chemical transformations in the roasting process it will release the unrivaled quality of our beans.

Once the coffee is harvested it is taken to the cement yard and properly sanitized for preserving the health of the fruit. On the yard it is spread in layers with adequate thickness to get the best use of the solar heat and turned over every 40 minutes in order to form several mini-plots. During the night the coffee is collected from larger plots which are properly covered to prevent exposure to excessive moisture and fermentation of the beans.
The coffee dried by this method remains on the yard for around 7 to 8 days, and depending on the weather conditions, until it reaches a humidity of 11 to 12%.

The coffee harvested in cherry point is subjected to peeling; the pulp being preserved since it is not mucilated to keep the sugar in the bean. After this step the coffee is immediately taken to the greenhouse on a suspense yard for three days where it is turned every 40 minutes until it loses between 18 and 20% of moisture. It is then taken to the indirect fire dryer where it remains for around 50 hours at a temperature between 30 and 40° until reaching the ideal humidity between 11 to 12%. The coffee, still in the drying process, is subjected to a rest for 5 to 6 hours before removing the parchment.

3. Drying of the hulled coffee only in the greenhouse

In this method after husking the coffee it is taken to the greenhouse, mirrored in a suspended yard and turned over every 40 minutes by remaining an average of 10 to 12 days in this process until reaching the moisture point of 11 to 12%.

4. Natural drying in the greenhouse dryer or suspended terrace

In this case the natural cherry coffee is taken to the suspended (covered) terrace after being picked where it will be dried in a natural way with all the husk. In this process the coffee is not hulled. The natural drying on the suspended terrace is longer than that one carried out on the cement terrace. The coffee remains in the greenhouse dryer for about 28 days or more until it reaches the desired condition. This method accentuates the qualities of the coffee with the appearance of floral or fruity aromas provided by fermentations that occurred in the slow drying process by being properly conducted. 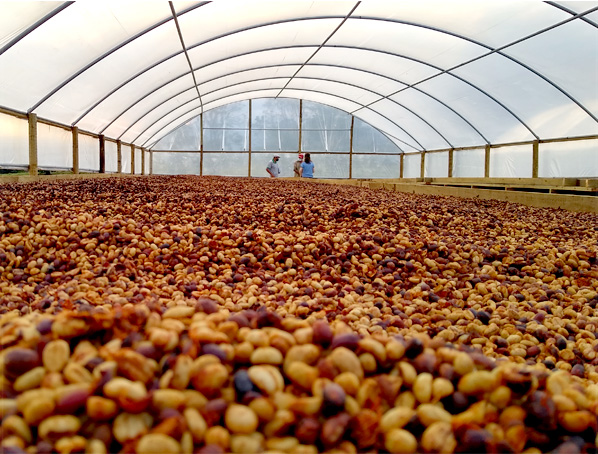 How does the husking process take place?

The coffee goes through a process of separation of impurities in which the leaves, sticks, rosette powder and so on are removed.

After separating the impurities the coffee is taken to the washer where the ripe, green and buoys fruits are separated. Only after the separation process the coffee goes to the husking.

Ripe and unripe fruits are husked separately and also dried in separated batches. This method guarantees the homogeneity and flavor of the beans following the selection of previously performed quality.

What do we do with the water and organic matter resulting from the husking process?

The water used in the husking process is reused in the irrigation of grass which it serves as food for the sheep. This reuse is only possible because in the process of husking, unlike pulping, there is no generation of impurities due to not removing the pulp.

The impurities that are eliminated in the first stage (leaves, sticks, rosette powder, etc.) and husk, resulting from the husking of the third stage, are used in composting which will serve as a nutrient for the crop in an organically cyclical sustainability system in which the plant itself generates nutrients for itself.

Biodynamic preparations are added to this compost (thousand in vines, dandelion, chamomile, nettle and oak) and irrigated with previously dynamized valerian by following the criteria established by and for Biodynamics.

The alchemy of coffee growing

The alchemy of coffee growing is mirrored and associated with the alchemy of the earth generating life with life, and fostering the radiance of a state of well-being that spreads reciprocally and organically from the earth to the plant, from the plant to the animals, from those to the man, from the man to the Cosmos and from the Cosmos again to the earth, successively remaking this path of balance that promotes health at all levels.

For us from Giori farm coffee is the bearer of life: the life that moves healing the latent energy in every living being that inhabits our planet.

For us from Giori farm coffee is the bearer of life: the life that moves healing the latent energy in every living being that inhabits our planet. 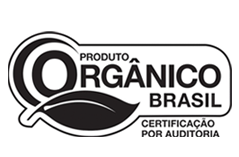 Awarded by Conformity Assessment Bodies (OAC) accredited by the Ministry of Agriculture, Livestock and Supply (MAPA); this seal identifies and controls the national organic food production as to its origin and production process. It is checked after compliance with production standards within the farm, products preparation, transportation and points of sale, and must appear on product labels. 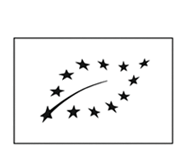 Granted by the Organización Internacional Agropecuaria S.A. (OIA), the Organic European Union certification is granted for certified products as organic by an agency or authorized control body. It represents that the product has fulfilled strict conditions of production, processing, transport, and storage, and is given to products that contain at least 95% organic ingredients and meet other strict conditions for the remaining 5%. 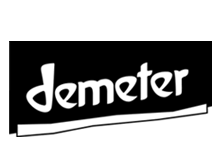 Granted by IBD, the IBD Organic certification ensures food processing according to the organic production norms and practices which guarantees the consumer their origin free from chemical contamination by respecting the environment and the worker. There are four certificates: US (American), EU (European), BR (Brazilian), and DEMETER (biodynamic, traded globally).